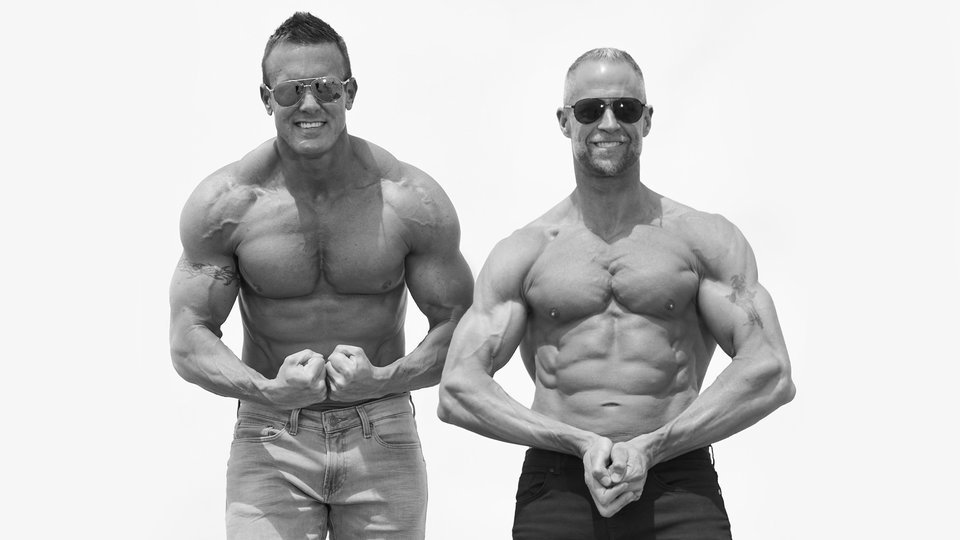 When the term “dad bod” leapt into the popular lexicon a few years ago, few of us could have predicted that it—and the debate around it—would prove to be so long-lasting.

Chalk it up to the dual nature of the dad bod. When stories started popping up that, as the Daily News claimed, “flab is the new fab” and hard bodies were less attractive, the new term simultaneously empowered those who have it—”See? I am attractive, dammit!”—and gave the super-fit a rallying cry that they could easily pun around. Look no further than Bodybuilding.com articles like “From Dad Bod to Dat Bod,” and “How to Transform Your Body from Dad to Rad.”

Whether you love it, hate it, or are simply a little disappointed when you look in the mirror at it, the dad bod remains…a thing.

And Brandan Fokken would like to talk to you about yours. Fokken is a fitness model and IFBB physique pro. Recently, he came together with Todd Abrams, a fitness entrepreneur and the CEO of Icon Meals, to create Dad Bod, Inc., a company with a mission to share information about fitness, business, and all the places in life that the two can intersect.

Fokken talked with Bodybuilding.com about the rise of dad-bod culture and what his advice is for anyone looking to upgrade theirs.

Seriously, what’s so bad about a dad bod?

Don’t get me wrong, I have nothing against someone who holds some extra weight or doesn’t work out. They have their reasons.

But I don’t like promoting the idea that the normal state of a dad should be pudgy and soft, and that many or most women prefer that type of body. I simply don’t buy it. I’m a dad, and I work hard every single day. And the women I know, and the dads I associate with, don’t buy it either.

We simply want people to succeed, to be healthy and happy, and to pass that on to their kids. We’re all about teaching the skills necessary to hold yourself to a higher standard, because so many men don’t have a role model to do that for them. In our view, transcending the “dad bod” mindset isn’t just about the body. It’s about finding success in the gym, nutrition, business, your marriage and personal relationships—and then setting examples in all those areas for your kids and everyone else watching you.

Really, it’s all about longevity—to be there long term for your kids and your partner. There is nothing wrong with you, but you, like everyone else, are capable of more: doing more, being happier and healthier, more confident, full of more energy and life. 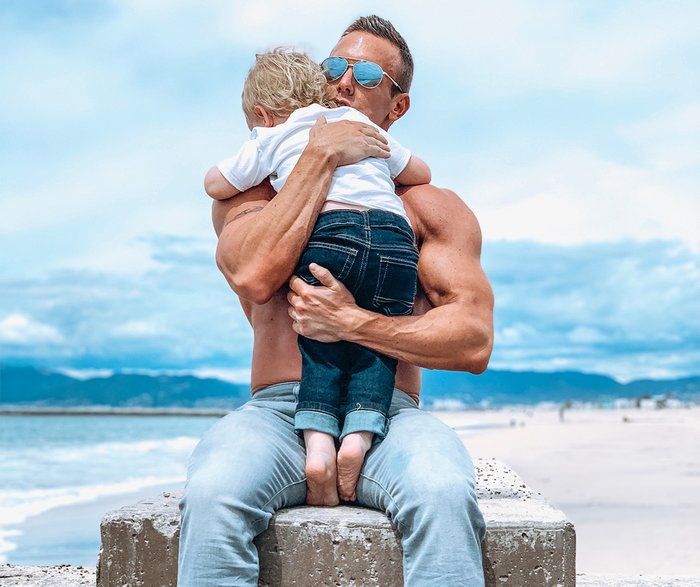 But maybe I don’t have time. What’s the least amount of effort I can put in and actually get something out of it?

If you’re thinking about not having time and the least amount of effort, you’re already thinking about this the wrong way. You have time. You just need to prioritize it.

I know that sounds harsh, but I’ve worked with countless busy parents over the course of my career, and I’ve inevitably been able to show them how to make this work. At first, let it add up slowly. Start at the gym a couple days a week, doing some light full-body lifting, and then add in some cardio.

Think of it this way: You are the culmination of all the good and bad in your life. All we’re trying to do is tip the scales more toward good than bad by adding to the good when you can. Before you know it, you’ll have created a sustainable lifestyle for yourself.

You don’t have to be perfect. Just keep moving forward when you can, and great things will happen. 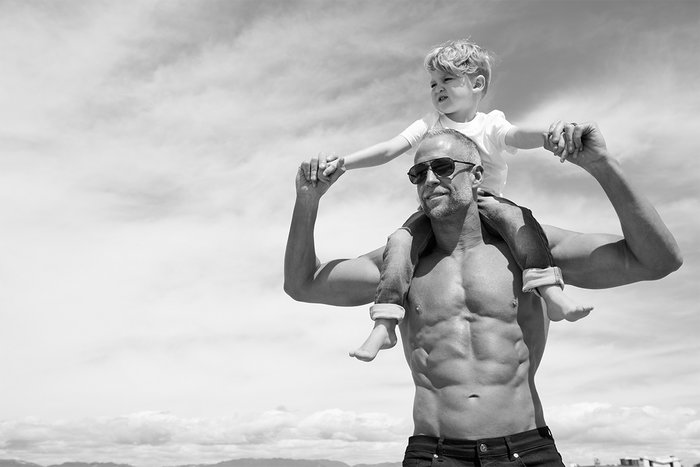 It sounds good, but maybe it’s too late for me. Seriously: How much progress can a man in his 30s or 40s truly make after, say, not lifting regularly (or at all) in many years?

You can make lots of progress! You aren’t dead, are you? I’m turning 40 this year. At 35, I thought the sky was falling and the world was going to end. I thought, “Well, this is it. It’s all downhill from here.” Maybe you’ve had a similar moment in your own life. 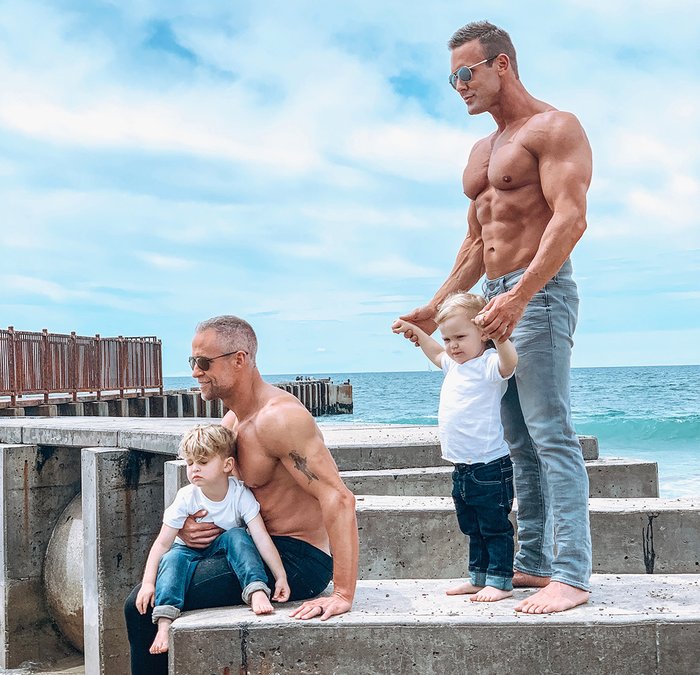 Then, I made the choice to simply aim to keep moving forward, come what may. Even if I fell flat on my face! But guess what? I didn’t flop. I went pro in my sport later that year, have landed sponsorships and many magazine covers, traveled the world, and improved my physique each year since. I’ve also become more successful in business, started multiple new businesses, and became a new father at age 37—when I discovered what being “busy” really means.

I’m no different than you or anyone else. I just have my mindset that I want the things I go after, and I am willing to be patient and work hard to achieve them.

That’s all I’m trying to teach: Once you make the choice to change your life, your body can and will follow. It’s your mind you have to convince.

If a man is going to change just one thing in his diet to make maximum impact on both how he looks and feels, what should it be?

I’m going to say focus on whole, healthy foods—not one particular type of food, but rather the full spectrum of foods you find along the perimeter of the grocery store. Lean proteins, lots of veggies, some fruits, some good fats. Be consistent with just those four staples, and there’s a lot of room for you to customize for your body and your preferences. 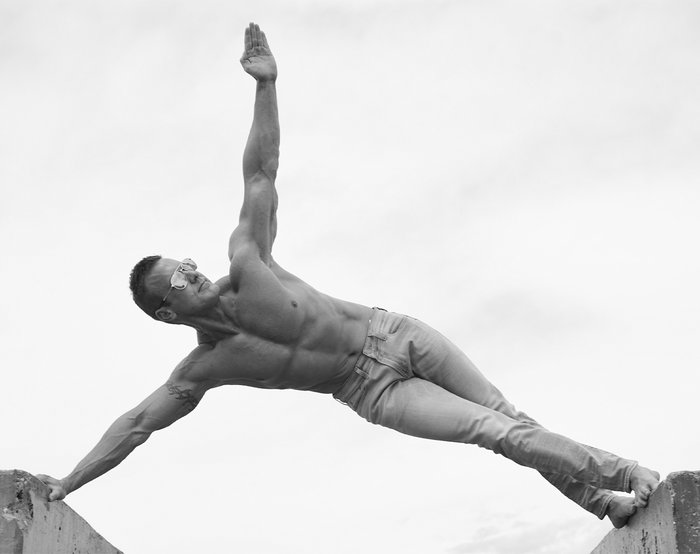 I’m not someone who recommends anyone cut any one thing out of their diet, either. It’s all about portions! Once you can learn how to be satisfied with a little of something rather than a lot of it, you’re on the right track.

In other words, if you want an occasional doughnut, that’s fine! Don’t overthink it—enjoy it. Just know if you have 10 of them, and it’s the norm for you, then all the gym time in the world won’t balance it out.

But you shouldn’t just take my word for it. It will take time to find what works best for you. If I had to really say one thing, it’s strive to be consistent over time. Many small steps forward add up to big steps over time.

That, and stay hydrated! Too many people don’t.

Is it enough to just do the same workout over and over again, or do I need to get all complicated about it?

Some people can stick with the same training protocol for months on end and see results. Seriously, they can! They just keep changing the weights and rest periods, and it works for them. Some people change it up every week, and that’s what works for them.

My personal opinion is that as long as you are seeing results, stick with what you are doing until you don’t see results. Then, vary it. I like variety myself, so my workouts change often, but I also have a handful of go-to exercises I tend to stick with no matter what. Find what works for you and what you enjoy doing.

At a certain point in your life, simply getting off the couch and making a decision to move more—no matter what that movement looks like—is what you need. At another time, spending an hour or two in the gym may be exactly what you want. And this can change! So let it. Do what you enjoy and take the time to get to know your body, and it will make the process even easier for you. 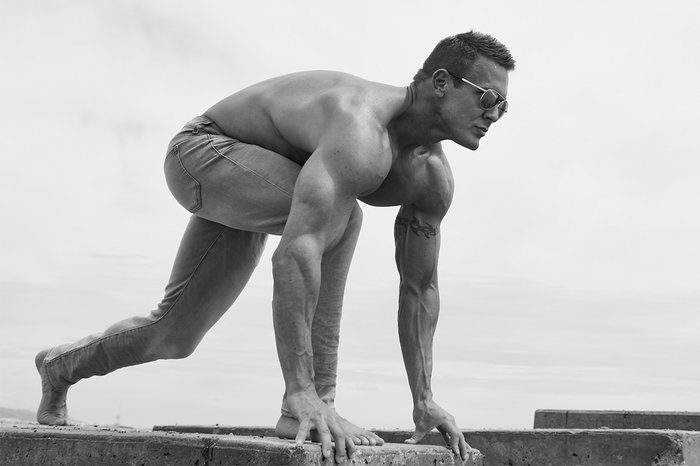 What’s the best split for a busy guy? I’m pretty sure I can’t keep up with a bro split.

It depends on how many days you are going to work out. For people with little time, I usually suggest lifting circuits where you hit 2-3 body parts in a series, and then hit some HIIT at the end for a max burn.

It keeps you moving, builds muscle, burns fat, and gets you in and out quickly.

For example, you could start with the “Full-Body Circuit Workout” video I created for Bodybuilding.com, and break up the 12-move circuit into smaller groupings depending on the equipment that’s free at your gym. It could look like this:

How to Upgrade Your Dad Bod Workout

When you need a change of pace, you could give the same treatment to my “Total-Body Transformation Circuit.”

BodyFit has over 50 expert-created plans, many of them perfect for any dad looking to upgrade his bod. Some of our most popular transformation programs include: